With Virginia being the location of numerous Civil War battles and Richmond being the Confederate capital, it is fitting that Virginia’s capital city has one of the best museums dedicated to the War Between the States.  In this week's SCHOOL TRIP SPOTLIGHT, licensed tour guide Christian Mirasol gives readers his perspective on visiting the American Civil War Museum.

The museum actually comprises of three sites: The Historic Tredegar Complex and the White House of the Confederacy in Richmond, and the American Civil War Museum at Appomattox.

Each location provides an assortment of hands-on, artifact-driven, student-centered programs on the causes, effects, and legacy of the Civil War as well as other topics such as emancipation, soldier life, and battlefield medicine.  General (no cost) and premium (cost) programs are available. Your student travel consultant can coordinate with the museum on what options can best suit your groups. Teachers, chaperones, and students can be provided with specially designed materials as they make their way through the exhibits with stopping points, along with thought-provoking questions, detailed background information, and compelling discussion ideas.

Slated to open this Spring 2019, the long-anticipated 28,000 square-foot, nearly $30 million expansion of its Tredegar Iron Works site will fuse the collection of Confederate battle flags, uniforms, weapons, oil paintings, and other historic relics with a narrative-based museum that uses bold, dynamic exhibits, and living history events to relate its 360-degree telling of the war. 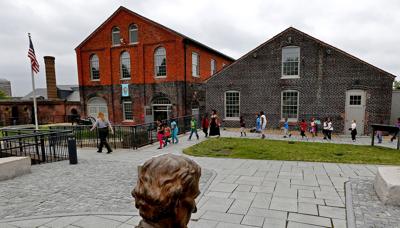 The new building, which incorporates the ruins of the crumbling iron works, will offer expanded gallery spaces, an experience theatre, and improved storage and preservation areas for its renowned collection of more than 100,000 artifacts.  Similar to the common war practice of walking across battlefields to collect souvenirs and valuables, there will be a clear floor where visitors can walk over items, such as buckles, bullets, shoes, battle-tattered uniforms and discarded weapons.  Look for the re-creation of a cave to represent the conditions endured by civilians, who sought refuge from gunfire and bombardment during long battles. Deprived of food either by the Union blockade or traveling armies, they sometimes resorted to eating dogs and rats for their survival.  In addition, groups can observe a musket firing demonstration, and have a tour of nearby Brown’s Island.

White House of the Confederacy:

About a mile away from the Historic Tredegar facility on E. Clay Street is where the White House of the Confederacy is located.  Built in 1818 originally as a private residence for a doctor, this National Historic Landmark was the residence of Confederate President Jefferson Davis, his wife Varina, and their children from August 1861 until the evacuation of Richmond in April 1865.  In addition, it has served as a headquarters of U.S. occupying forces during Reconstruction, the Richmond Central School, and part of the former Museum of the Confederacy. Fully restored to what it looked like during Davis’ stay, groups can journey through the home, view its mix of original and time period furnishings and artifacts, and learn not only about the First Family of the Confederacy but also the enslaved and free African-Americans, European immigrants, and personal staff who worked in the home, as well as visitors like Robert E. Lee and President Abraham Lincoln.

Located 90 minutes west of Richmond, adjacent to the Appomattox Court House National Historical Park, this 5,000 square-foot American Civil War Museum location chronicles the overlapping stories of the closing days of the war and the beginnings of our country’s journey towards reuni

fication as Americans through artifacts, photographs, original source documents, a dozen audiovisual stations, and the Wall of Faces in its permanent exhibit.  Groups will experience the “Appomattox Moment” when the armies of Union General Ulysses S. Grant and Confederate General Robert E. Lee clashed at a rural crossroads on April 9, 1865. The words of General Lee’s final order to his troops can be heard surrounded by images and uniforms of those present at the formal surrender of the Army of Northern Virginia. On display are General Lee’s actual sword and uniform he wore to the formal meeting with Grant in the McLean House in the village of Appomattox Court House.